Why I didn’t opt for the iPhone

When I tell people, I have got a new phone, I get asked is it the iPhone as people seem to think its the new all spangled mobile phone, and that I would certainly have one. Well I usually disappoint them, and say No.

That’s a good question, for me personally, to upgrade to an iPhone would have been £20($40) cheaper so why did I go for a T-Mobile Touch (HTC Nike), with Windows Mobile 6?

Well, I suppose the first reason is that I have had HTC, Windows Mobile based handsets for about the past 9 years now, my second phone was a HTC Windows Smartphone that ran Windows CE from Orange (I’m thinking it was the C500, but that was another handset I had) – that phone still works, its actually still used by a friend of mine to this date (Out of interest, the first phone I got free from work, when I worked at Barclays – I thought it was fabulous, it was the Motorola Startac, which was very Star Treky as you could flip it open like the Star Trek Communicators, and I also tried a Nokia Matrix Phone but that didn’t survive a drop in the bath, and cost me all my contacts).

So I have a long history with the manufacturer, and OS builder, which some might say that is a good enough reason to stick with them, the handsets are usually built well (I tend to return one faulty handset per contract, which tends to be more of a fault caused due to shipping or my initial play with it, as appose to a hardware of software failure), and as I mentioned earlier, all the handsets still work well to this date, infact I still have 3 of them, well 2, a friend has one of them, and I also sold one.

But truth be told, I was ever so slightly torn between the two phones, and I had to seriously think which phone I wanted and I ended up going through the pro’s and cons of an iPhone.

To start with, I went to the iPhone Features Page to see what it had.

The Home Screen… Ok, its nothing special really, it shows a collection of icons, all of which take you to an app on the phone. I get a nice clear clock (your telling me you don’t use your phone a watch?) . 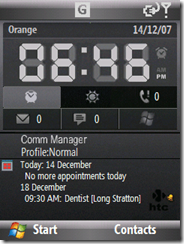 Above shows the iPhone homepage on the left, and the HTC Standard Homepage on the right… Difference is, that the HTC Homepage is fully customisable, with a downloadable homepage creator. I could have a bright bring homescreen, or an homepage based on the iPhone if I wanted. So more customisation, something familiar, I decided this point didn’t go to the iPhone.

Is a phone, actually a feature of a mobile phone? If I was buying a laptop, that had a phone in it, then I would consider it a feature… But not on a phone. I’m bemused that Apple consider a Phone on a phone as a feature.

Oh and incase your wondering, I have similar contact managers, I can shout names at my phone and it start calling people, I can have Incoming Photo Caller ID, I can Video Call……

Good one, the iPhone does have better internal mail management. But I use gMail and Google provide apps for the Windows Smartphone, as do Windows, Yahoo and so on… So you can have a decent mail too, besides which, I prefer the online view for Gmail which is undoubtedly the best mail tool around at the moment, as such to me this feature doesn’t matter.

Another good one, the standard internet explorer on a Windows Smartphone isn’t the best, it serves its purpose though, I can read most webpage’s, including Youtube through it and it works fine. In addition, over the years I have used about 5 alternative browsers from Mozilla, Windows, SkyDrive and so on, and the web can be so much better, and from reviews I have read Skydrive is the best mobile browser at the moment. Its free, and I have it on my Windows Smartphone, so I suppose Windows Smartphone wins this one, although its not using Windows own Browser – but this goes to show how flexible the Windows Smartphone is.

I have a 1gig Memory card in my Windows Smartphone, it acts like a harddrive, and can be used in a pendrive converter and become my true portable office taking my office from the home PC, Mobile, and finally to work.

But! What is interesting, is that I can get a 8gig Memory card, and I am sure the capacity of these cards will grow.

Now back to the feature, Music… OK, I cant fit 8gig of music onto my Windows Smartphone, but I could very easily. I have Windows Media Player, amongst others which let me play any file type, from MP3, to MPEG video, add to that Real Player which lets me stream radio stations, and the Last.fm program for the Smartphone, and I can have anything I want… Much more that the iPhone.

Again, I each to their own, but Windows presents emails in 2 ways, one message one view, or one recipient one view, a little like a chat window. The iPhone offer the chat view, so I would say even scores here.

Got it, in fact I have the same one as used on iPhone.

We’ve spoken about iPod, I could if I wanted sync my music folder with my phone and do it that way, or I could just visit a site like amazon MP3, or Tesco Music and download music cheaper?

Don’t get me wrong, I may be mistaken on this one but I am not very excited about the App Store. I have for years been able to visit sites and install software to my phone to enhance it.. It seems to me all that’s different is their is probably more cost, its written in a different code, and is called an App, and not a program file?

Got it, had it way before the iPhone

Got, Got and Got.

Got. (Actually, I tell a lie here, I have not got a calculator at the moment, but that is purely because I switched the ROM on my phone, and chose one that didn’t come with a calculator)

Add to that, I have a video camera, and can live stream to the web, turning my phone into a decent webcam as well.

Oh, and add to the above, I have Mobile Office, which lets me open any word document, PowerPoint Presentation, One Note, Email, PDF and so on, which I believe iPhone doesn’t support

Oh, I also have mobile TV…

So just from the feature above, I was not entirely won over, then I remembered, it comes with 3G the uber fast mobile network. Oh, hang on a minute, my handset comes with HSDPA which is faster, and is actually a mobile broadband network, which in turn means that I can plug my phone into the laptop, and have the phone power the internet, so I can browse, while taking calls – Its looking like a very mobile office if that’s the kind of thing you want!

The fact is, I have a pretty tame mobile phone now. When I was younger and more adventurous, I use to pimp my phone to the max, it I wanted a game to play on the train home, I would get what ever game I wanted, software was always easy and usually free to come by, and utilities, you name it, I can get it which in effect meant that my phone could take over as my PC, when my PC was in pieces which happened a lot when I was younger. Finally, to add the cherry to the cake, I can remotely take control of my PC, from my phone (Its very handy as a remote control for you PC) so I could be laying on the beach, while controlling what my PC was downloading.

So back to the purpose of the post, when it came down to it for me, the iPhone was offering nothing new, in fact I would have lost features, and much like the Blackberry, the iPhone didn’t cut it for me.

And before anyone asks if I even tried an iPhone… The answer is yes, and I got to play with one before it came out in the UK, as a friend works for o2, and was testing it, so I got a good play with it.

I Got My New Phone…

A few weeks ago, I asked what phone I should get, well not one bloody person answered, so I made my own decision!

I decided to opt for the T-Mobile Touch Plus (also known as the HTC Nike), although its not an iPhone, and its the same old Windows Mobile 6 that I have been using for months, I decided it was the best option.

Why is it the best option? Well, for one the data package with T-Mobile is ultimately better than o2 are offering, I actually use to work for o2, and dropped my staff tariff to move over to T-Mobile as it worked out so much cheaper (in my particular case, I saved about £75 a month, with my mobile phone bills dropping from £120 with o2, down to £45 with T-Mobile. The phone also comes with mobile broadband which is really good when out and about with the laptop, and I hate to say it, but I’m an old stalwart, and knew the iPhone was not going to live up to my expectations especially since all the features that the iPhone offers are on my WM6 Touch.