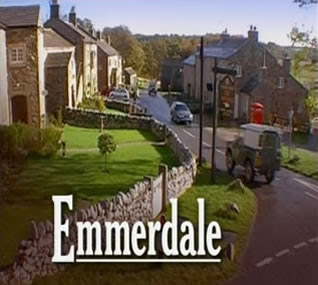 I have started to watch Emmerdale recently. The frustrating wait in the evening for Coronation Street to begin was becoming too much to bear and something had to give. I have been aware of it forever (it seems) of course, but I have never actually dedicated myself to even an entire episode. And I began to question why. I have watched every soap, ever, at some point and have always been willing to give them a chance. I loved Eldorado and still miss the characters’ weekly outing to Los Lobos gigs, something which must only seem like entertainment if you are a working class ex pat in a wheelchair (you have to have seen it). Remember Revelations? Thought not. It was a British late night “adult” soap (bare bums and bisexuals, the odd “shit” or “bastard”) on some ITV regions many moons ago. And I loved it. I gave up on Neighbours and Home and Away when I began to realise I was older than the combined age of most of the characters, but not before I had spent may hours deeply involved in the lives of perky antipodean eye candy.

Big hair, shoulders and jewellery can make a person weak at the knees, and American soaps have a quality all of their own. But our soaps are the best because they seem more real. At least the ones about poor people do. Hands up who loved Families? The BBC’s brave attempt to launch a middle class soap was a terrific flop. People don’t want to watch the bourgeoisie. Who cares about the problems of the comfortably off? They’re less likely to become involved in fisticuffs over a love rat or money, and they don’t wear cheap clothes which rip and make-up which runs with bitter, snotty tears. They probably sit down and discuss the affair and the missing skiing holiday money (it would hardly be Christmas Club money) with a bottle of Chianti or a latte. The working class soap offers the elements of danger and excitement we hope for in a really good episode of Jeremy Kyle. Sex and fighting.

So, back to the point. The only soap I currently watch is Corrie. Or was Corrie. Because it turns out Emmerdale is actually not that bad at all. I became interested after I noticed that it had gone head to head with EastEnders (boring as sin, southerners are surly and depressive, the north is poor but chirpy). Surely, I thought, this must be a confident soap if it is willing to break the unwritten rule of never making the soap fans choose. Can it really be that good? Can this absurd gamble ever pay off? Michael Grade seems to think so and that made me curious. So I began to watch. 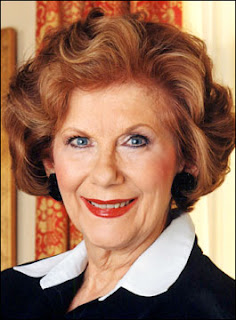 Its a soap after all, so picking up the characters and storylines was a matter of switching on the box and opening my eyes. I’ve been briefed about some characters and their foibles. I knew Emmerdale is a village somewhere near Leeds with few inhabitants and a lot going on. And I knew that there was a story involving Madge Bishop from Neighbours and a cannabis factory thanks to watching This Morning and reading the tabloids. Madge (who had changed her name to Lily, I probably missed the episode where that was explained) had been bullied into growing the pot in a poly tunnel by a Dingle, which it turns out is not a nasty kind of growth but a particularly feckless and lawless family who seem widespread throughout the village, probably due to interbreeding as most of them seem to have at least some degree of retardation. Sam Dingle seems the most retarded and was persuaded to drive the cannabis to a customer, stopping along the way to pick up a police officer he happened to know. Now Social Services, the soap equivalent of the Wicked Witch of the West, want to take his son Samson and put him in care (I think the mother is dead. Or in prison. Or a prostitute). Elsewhere a young lad in prison with enormous biceps wants to marry a brunette girl. Another brunette girl is a police officer married to a Dingle, determined to prove the name is not a curse. And a further brunette girl runs a taxi firm, borrowed some money and was going out with the grass-growing Dingle until he grew the grass and got Sam Dingle into trouble. The brunette girls are currently causing me a little trouble as I can only tell them apart occasionally and have to rely on clues like the police uniform and whether they are on the phone to a prison inmate with huge arms. And now thanks to all the doobie shenanigans, Madge/Lily has disappeared after falling out with her bald sister, Edna. Edna threw her out for giving her cannabis tea to drink without her knowledge and for giving her an illegitimate son to bring up whilst she emigrated to another country (or something). Edna always wears a hat, so at least you aren’t confronted by the terrifying sight of a totally bald elderly woman. At least I assume she’s bald anyway. No-one has mentioned it but it’s not the sort of thing one mentions, is it? Lily was a great big pot head, and I hope she’s coming back. I hear that Marilyn from Home and Away is going to be back in it soon so that will be another familiar face.

I’m going to persevere with Emmerdale, I’ve been quite impressed so far. It doesn’t have the superior writing and acting of Coronation Street, or its sophisticated comedy, but it is still well written and acted so its happily filling a gap. I’ll keep you posted.